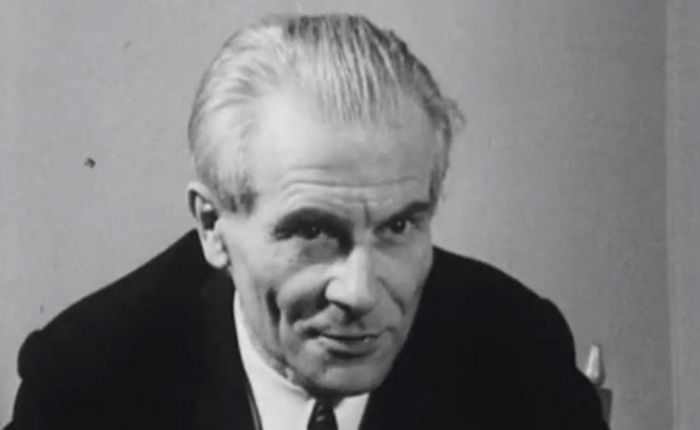 A parable of Irish unity, with apologies to Félicien Marceau…

After spending two years behind a bank counter in Drogheda, his home town, Victor had just been transferred to Belfast for further training at head office. This meant he could be initiated into the secrets and all the other ins and outs of high finance. To all appearances he was a serious lad with a future and perfectly capable of one day becoming at least an assistant manager.

We don’t need to dwell on describing his happiness. Although he was, as we have said, a serious worker, capable and appreciated by his superiors, and therefore a person of some standing at just twenty-three, he had until now lived with his parents and, in some way, lived in their shadow. It wasn’t that he’d suffered from this arrangement. Besides, he loved his parents. As we’ve said more than once, he was a serious boy.

The cinema every Saturday and a café bar every Sunday afternoon, these were enough for him, socially. For the rest of his free time he spent all his evenings between his father and mother. In summer, he’d be on the doorstep chatting with the neighbours or looking at the cars that were going down to Dublin. In winter, he’d either be reading or arranging his stamp collection that was supplemented with the help of his uncle who was a driver on a bus that regularly crossed the border.

But in the end, of course, freedom is another thing altogether. On leaving Drogheda, Victor was still only a lad, overwhelmed with advice, woolly socks and vests. On his arrival in Belfast, under the big roof of Central Station, he was no longer a boy. Something of the adventurous soul of his uncle had just awoken in him. Proudly, he took a taxi, the first such trip on his own in his life. This taxi was the wave goodbye to his childhood.

The same day he busied himself with finding a studio. The first place he viewed didn’t please him. The owner clearly had a big mouth. The second didn’t tickle his fancy either. At three in the afternoon the owner was still in her bathrobe and, from Victor’s point of view, she looked like she wasn’t into keeping the building clean. He chose the third place he saw because there he was met only with indifference. Victor had already figured out that the indifference of others is linked to freedom.

His stuff put away, he went out, impatient to inspect the charms of Belfast. After a blip when he took the wrong bus that thankfully didn’t take him to any parts where his southern accent wouldn’t have been appreciated, he strolled along wide avenues, well built but otherwise undistinguished, and ate two sandwiches in a neutral city centre bar before returning to his new place.

His room was immersed in the night, in the silence. For a minute he missed the peaceful chit-chat of his mother and the outbursts of his father, a religious man who couldn’t read a newspaper without getting angry. This homesick feeling only lasted a moment, though. Lying on his narrow bed, he felt himself still lifted by the hubbub that had welcomed him when he left Central Station.

Eight days later, as soon as he had got to know his way around, he was in love. It’s a constant: free a man and he thinks of love. Until now, Victor had always shown himself shy around young women but the fluttering wings of freedom tend to lessen one’s timidity. At the bank he often joked with some of the female staff. They liked his southern accent and remarked on it. One of them told him she was going to a nightclub with some friends on Saturday.

There he made the acquaintance of a girl called Iris, a cousin of the fiancé of the lady who’d invited him along. Iris had dark hair and big dark eyes and her long lashes fluttered when she spoke in what he soon recognized as her sharp, assured manner. She spoke a lot but during their first dance, Victor complimented her eyes. Next it was her dress. By the third dance they were practically in love. She told him she didn’t drink but was learning the tango. In general, serious boys are made for the tango.

He suggested a visit to the cinema. “It’s an idea,” replied Iris, deliberately. Wednesday was fixed. Iris wore a lovely sandy coat with a wide belt; the film was funny; and she laughed. It relaxed the normal composure of her face. The next cinema visit took place on a Tuesday. Love is impatient.

Soon he was invited to meet her parents, out in Holywood. She said she’d told them about him and they wanted to meet him. He had almost a week to think about this visit. He loved Iris. They would get married. They would live happily ever after.

Both her parents were dressed in black on the day. The mother spoke more than the father, who was an accountant. It was a rainy afternoon and rather than go out anywhere they looked at photo albums. Mother and daughter talked about shared memories. The men said nothing. It would have been difficult for either to get a word in. By the end of the meeting, Victor had been invited back for dinner the next week.

When they got engaged, Iris’s father expressed a desire to get to know Victor’s parents. To that end, he requested that Victor ask his own father to write him a letter. To Victor it was just a tad formal, if not odd, but in a spirit of conciliation he said he’d take care of it. He sent a text about it to his father, adding, “These people are from the North, please humour them” and his father’s reply gave an immediate assurance on the matter.

The next time he called round, though, he was met with parental long faces. Iris herself was not to be seen.

He held out the envelope, for which he’d evidently had to pay the postage.

The elder man lifted his hand to indicate stop.

“I’m not rich but nonetheless I can cover the postage.”

Embarrassed, Victor said “Of course” and then tried to explain that he only wanted to make up for the nuisance. The other man lifted his hand once more.

“It’s not about that. It’s more serious. I know the people of the South. When they don’t want something and they don’t want to say it, they write that they’re in agreement but they don’t bother with a stamp.”
“No stamp?”
“No stamp,” the other repeated gravely. “The way they look at it, a letter with no stamp doesn’t mean anything.”

The mother here interjected a quiet sob. Victor woke up.

“But that’s absurd. I’m from the South and I’ve never heard of that habit.”
“That does you credit, young man, but the habit is dishonest. When people disagree, it’s better to say it openly, like we do in the North.”
“That’s what my father would have done,” retorted Victor.
“Then why didn’t he put a stamp on this?”
“He must have forgotten.”
“Forgotten? For a letter of such importance?”
“Or else the stamp fell off.”
“Young man, I’m fifty-three. There are two things I no longer believe in. Letters that get lost and stamps that fall off.”
“But suppose he did forget the stamp. His letter remains the same.”
“No, that changes everything. He doesn’t want to be involved. The people of the South are like that.”
“What if he writes you another letter? With a stamp, of course.”
“The message remains the same,” came the solemn reply.

Then the mother intervened. Allowing for her husband’s feelings, she still suggested that a new letter just might make for a new start. In this way she talked her husband into agreeing with a few silent nods. Then Iris made an appearance and she and Victor went out for a walk. When Iris observed that a stamp cost very little, Victor got angry and so they parted on rather bad terms. When he got home, though, Victor immediately got in touch with his father.

Unfortunately Victor’s father was one of those men who are happiest when life gives them an excuse to get up on a high horse and wrap themselves in their pride. He wanted to know what right people in the North had to suspect the integrity of people in the South. Moreover he was sure he hadn’t forgotten the stamp and thought it must have fallen off. Anyway, he had written once and he wouldn’t give his honest opinion twice. His dignity forbade it.

Victor began to be worried. He pleaded with his father to write again and, in the meantime, assured his prospective father-in-law that the new letter was on its way. The latter remained quietly sceptical, while Iris just became sarcastic about the price of a stamp and how busy Victor’s father had to be, given the delay with this second letter.

Victor was beginning to be turned off. He thought of writing to the letters page of the Irish Times to ask if anyone knew of a tradition in the South of omitting a stamp to convey displeasure. There was no immediate feedback and still no second letter. The next time he visited his parents he found his father still put out over it.

“These people up North, I know them. He doesn’t want you to marry his daughter. He’s only looking for an excuse.”
“If he hadn’t wanted it, he’d have told me.”
“Is that what you believe? Anyway, I wonder if it wasn’t a sign. You’d be unhappy with people like that.”
“It’s not the father I’m marrying. It’s the daughter. And he only wants a letter.”
“He got his letter.”
“But without a stamp. He thinks it’s a slippery custom down here.”

Then Victor had a brainwave. He posed the hypothetical situation that the other father hadn’t received the letter. When his own protested that he had, Victor pointed out that he didn’t know that, as there had been no reply. In that light, it wouldn’t be undignified to send the same letter again, on the presumption of the loss of the first one. Grumbling at first, his father agreed, secretly pleased by the astuteness of his son. He wrote another letter and this time it got posted with two stamps affixed.

In Holywood, Iris opened the door to Victor without any obvious show of warmth or tenderness. Her father then appeared with a copy of the Irish Times in his hand. He was upset.

“You have me insulted in the press now.”

He showed Victor the letters page. Somebody had finally replied, basically urging Victor to tell his future father-in-law that he was an ass and insisting that there was no such custom in the South as had been proposed.

“But sir, if you’d read my letter, you’d have seen it was completely respectful.”
“And this reply? Who provoked this reply? I’m an ass. In the paper. Me.”
“Nobody will know it’s you.”
“I’ll know. Now you’d better leave, young man.”

Iris went to the window and looked out on the street.

She didn’t even turn around. There would be no wedding. A year later, back in Drogheda, Victor married a local girl who was nice, voluptuous and not inclined to lay down the law. At the reception, his father leaned over to him at the top table.

Victor smiled. For a moment he heard the sharp voice of Iris. No, he wouldn’t have been happy with them but that destiny wasn’t meant to be.